Somewhere between pragmatism and desperation is the place where US Soccer truly lives. I wish we got to visit it more often.

When Jurgen Klinsmann was hired to replace Bob Bradley three years ago, I praised the move based upon the fact that Klinsmann was unpredictable, that he'd shake up US Soccer and – hopefully – blend the attacking talent we're starting to produce in droves with a more stable defensive structure. The kicker of that article, which I am too emotionally wrung out to find and link to, was "With Klinsmann, you'll never know. The surprises will come."

It turns out we really, really didn't know. We assumed it would be more attacking, but it's not - under Klinsmann it's defense over all, and a structure built upon coaxing the opposition into cross after cross while often ignoring the attack entirely.

Belgium took the bait, and the US had their chances to punish the Red Devils. For 105 minutes we were pragmatic and clever and mostly pretty boring, and a little bit opportunistic. Then after we went down 2-0, we were rampant and – almost – completely heroic.

1. This was the World Cup of game states

The analytics community is big on "game states," as they should be (I say "they" because I was an English major and actually don't remember how to do anything beyond long division). "Game state" means – broadly – what the score of the game is, and how it affects how the two teams play.

"Just hope," Tim Howard explained on the air afterward. "When we changed over we just said let's try and get a goal and if we get a goal we put them under pressure. And at 2-1 we did that. Dream falls short but like I said this is an incredible group and I'll never forget this night."

No one else should forget it, either, because the US were brilliant in attack once down a goal (and even better once down two). That follows the same pattern against Portugal, as well as the desperation push once Ghana equalized.

Here's the graph of US shots from the first 105 minutes: 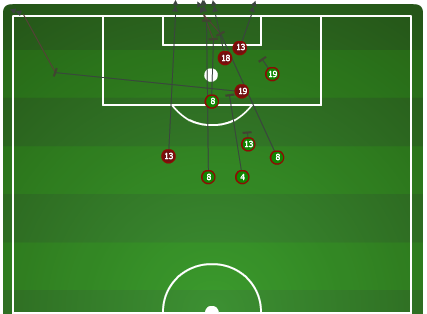 And here's the last 15, once desperation kicked in: 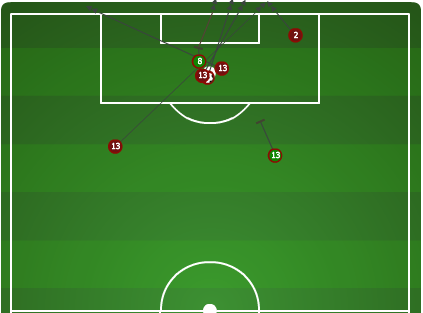 In case you don't want to count: that's seven shots each.

Part of this is Belgium falling victim to game states themselves. But the bigger part of it is Klinsmann taking the shackles off and dropping pragmatism for attacking verve, something which should happen earlier and more often going forward. This US is a very, very talented team – one of the dozen or so best in the world. It's time to stop playing like we're the underdog at all times and actually deliver the promise of proactive soccer.

Just ask Belgium if they wanted this one to last another 10 minutes.

Yet after Jozy Altidore went out of the tournament, and Aron Johannsson was so ineffective, we alternated between the 4-5-1 and today's 4-6-0 for the most part. It wasn't exactly brutal – the US defense is disciplined (credit to Klinsmann) and really, really good – but it does require a ton of emergency defense. 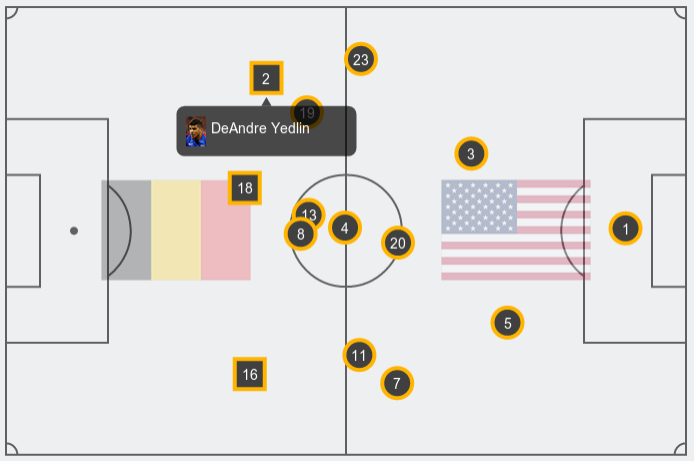 You can see how deep Clint Dempsey's touches were. He's the best US attacker, but the effect of pushing him high into the attack all by himself actually isolated him and forced him to track back in order to get any time on the ball.

In effect, this neutralized one of the two best US players. Instead of playing the game through him (and Michael Bradley), we ended up using Dempsey as a decoy and limited Bradley's targets as a creative hub.

Klinsmann's decision to snub Eddie Johnson and/or Terrence Boyd – two guys who have filled in somewhat admirably for Altidore before – doomed the US to this type of tactical plan. And it limited our two best players to only flashes of individual brilliance while ceding control of the game to whoever we happened to be playing.

That sentiment above is my big issue. Partially because I want to actually see aesthetic progress, but mostly because the US are clearly a better, more dangerous team when they attack.

Klinsmann seemed to struggle with that.

I'll go to my grave believing that Kyle Beckerman was the best US player at this World Cup, and that it was ridiculous to play this game without him.

Good work @J_Klinsmann take out @KyleBeckerman and let em' run it up the gut all day long! @MLSAnalyst @MLS @RealSaltLake

This isn't a shot at Geoff Cameron, who did a very good job in central midfield. It's more of an argument of the floating midfield trio, one with roles that can be described as only loosely defined. When Beckerman's in there, he sits in front of the backline and allows the other midfielders more license to go forward.

Cameron, Bradley and Jermaine Jones (clearly out of gas today after a magnificent group stage) shared the job today, and after about 25 minutes the Belgians figured it out. Eden Hazard started picking the ball up a little bit further inside, and Divock Origi placed himself just a yard offside at almost all times in order to pin the US backline a bit deeper and prevent them from stepping out to help.

As a result Belgium were able to create central midfield overloads with Hazard and Kevin De Bruyne, and as a result of that, Tim Howard had to produce 16 saves. That's the most by any 'keeper in recorded World Cup history.

The attacking effect was just as pronounced, as Cameron didn't drop back into the gap between the two central defenders, Matt Besler and Omar Gonzalez. When Beckerman did that previously, it allowed both fullbacks – but especially the right side – to move forward at speed.

That was where to attack Belgium. The US finally picked up on it after we were losing.

7. Omar Gonzalez was huge, save for getting beat in the second minute. He's a master of emergency defense.

6. Vincent Kompany is just about my favorite defender in the world. Class on the pitch, class off of it as well:

I believe this is where the kids say "game recognize game."

5. Besler was immense through 105 minutes, but got overrun by Romelu Lukaku. I still think he starts next to Eddie Pope on the all-time US Best XI.

4. Julian Green! Forget the goal, which was clearly a mis-hit. What was most impressive was his run to get open – a clear understanding of how to attack flat and static backlines, as well as who was on the ball.

Julian Green pulls the #USMNT back within a goal http://t.co/DimkgN9eZa https://t.co/spBgBeea0q

I still don't think Green is going to be a dominant player, but he's clearly going to be very smart and very, very good. And that's a nice start.

Speaking of "who was on the ball," though...

Bradley was excellent once the US played with two forwards ahead of him, and even better once Green – an out-and-out attacker – came on for the ineffective Alejandro Bedoya. I'm not saying the US soccer community owes him an apology or anything, but different formations mean different responsibilities and even the very best players struggle to adjust.

So it's worth noting that Bradley did everying asked of him in four different formations and did it all without complaint.

2. DaMarcus Beasley was amazing. His crossing could have been better, and Kevin Mirallas was a double handful, but he defended on an island this entire tournament and only had one goal come down his side.

1. Finally... Klinsmann needs to be held to the same standard as the guys before him. Like Bob Bradley and Bruce Arena in 2010 and 2006, he whiffed on some pretty important roster choices. Like Bradley, he still did enough to get his team into the Round of 16. Like Bradley, that's enough to keep the job for another 12 months.

What he hasn't done is change US soccer – he's merely rolled the clock back to 1994. Given what he saw from these past four games, however, let's hope he's smart enough to let US soccer change him.

It's time to go on the attack.