It was supposed to be a big year for Toronto FC. Injected with superstar talent in Jermain Defoe, Michael Bradley and Gilberto, coupled with a strong core of players, the 2014 season was billed as a “bloody big deal” from day one, and the early results matched that billing to a tee.

“Some people see things as they are and say ‘Why?’ Others dream of what can be and they say ‘Why not. Today is why not. Why can’t we be great?”

“I think it was a big jump from last year. I mean, we were last place last year and this year we were fighting for a playoff spot. I think the club is heading in the right direction. People are looking at this season as a failure mainly just because of the potential that we had on our team and everything like that. For that, they call it a failure because we didn’t make the playoffs but if you really look at it at the end, we made a step forward now and now it’s about keeping the team together and forming a foundation so that in the years coming, we’ll be contending for championships.”

But TFC’s 2014 was a year of two distinct halves separated by the FIFA World Cup. Prior to the big event in Brazil, Toronto was firing on all cylinders, brushing aside teams like the Seattle Sounders, D.C. United and Columbus Crew courtesy of Defoe’s nose for goal. But after the World Cup, injuries sustained to key players saw Toronto struggle for points.

Bradley ended up playing most of the season with a foot injury, and had surgery twice. Defoe's Best XI-caliber first half of 2014 was followed by an invisible second half, thanks to a series of leg injuries that sapped him of both his speed and precision in the box. Captain Steven Caldwell missed his fair share of time as well, and the Reds never had enough depth to make up for that lack of veteran leadership.

Toronto nonetheless recorded franchise highs in wins (11) and points (41) in a single season, but missed out on playoffs once more. With a new manager installed in Greg Vanney - Ryan Nelsen was let go under contentious circumstances in later summer - and a year of MLS experience under the players’ belts, the club enters 2015 with more measured optimism.

Toronto FC’s highlight moment of the season must be split between the final Trillium Cup victory Aug. 9 over the Crew and the come-from-behind win over the Portland Timbers on Sept. 27. In both instances, Toronto FC found themselves down, having conceded two goals, before pulling off fast-and-furious-style late comebacks to claim all three points with a trio of goals.

Whether it was Defoe’s brace topped off by Doneil Henry against the Crew or Nick Hagglund’s double debut goals capped off by a Bradley free kick against the Timbers, Toronto FC pulled off two stunning victories in the dying moments, results that will go down in the memory of the teams’ supporters for years to come.

In the heat of the most crucial time in the season, Toronto FC felt a sense of injustice by some dubious refereeing decisions, in particular when a 1-1 draw with the Chicago Fire in mid September drew the harshest of criticisms from the team after referee David Gantar denied Gilberto a stunning last-gasp winning goal after Toronto clawed back from 1-0 down late in the match. The decision drew so much ire that even Bradley, usually a calm presence, was left baffled in the post-match interviews, saying, quite simply, the refereeing was just not good enough.

There can be only one goal, with a build up so memorable that it almost overshadowed the strike itself. Almost. Here’s how it went down: It was 1-1 in the 72nd minute at Red Bull Arena between Toronto FC and the New York Red Bulls on June 27. TFC won a free kick. Defoe, naturally, stepped over the ball, but Gilberto pushed him away. Defoe didn’t like that. The two shared a few pushes and shoves before Gilberto calmly took the ball, set it down and waited for the whistle. Gilberto then unleashed an absolute rocket of a shot straight onto the bottom of the crossbar and past the goalkeeper to give Toronto a 2-1 lead. Defoe, blushing and grinning with embarrassment, ran over to Gilberto, celebrated the goal with his teammate and the issue was forgotten.

No one player better exemplified the winning mentality, work ethic and ambition of a true leader this season than Bradley, and it is for that reason that he is absolutely the team’s most valuable player. Every offensive move went through his feet; with two goals, one being a last-second game winner, and four assists from deep in midfield, Bradley commanded a young Toronto FC side well and will be the rock on which the club looks to build its empire in the future.

Toronto made a number of midseason moves in 2014 but the best move of the year was, perhaps, the acquisition of Justin Morrow from the San Jose Earthquakes before the season began. Morrow was not only consistent in his defensive discipline; he provided offensive width on the counter attack, too. Quiet, tidy and no-nonsense, Morrow was a bright spot in the ever-shifting TFC back line.

“I think we need to establish what it takes to win, and they need to understand what it takes to win, not just one game or two games, but to win consistently and win enough to put yourself in a position to be champions. We need to strive to be the best team and be a championship team. We need to function and operate like that and establish a culture that is that way.” – Greg Vanney, TFC head coach 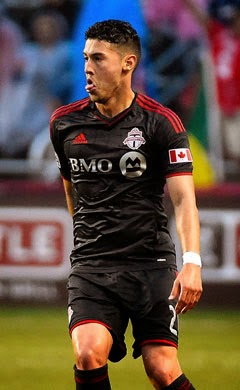 1. Consistency: Midfielder Jonathan Osorio said it best when he offered that there is a truth to the team, not well known: Toronto FC actually took a step forward this season. The temptation to hit the redo button must be ignored, and all signs indicate that on this front, the team’s staff and players are on the same page. Vanney said the team would undergo some natural turnover, but if TFC can keep a healthy core of players, "chemistry" could be the big star of 2015.

2. Prosperity, Luck and Health: A disproportionate number of long-term injuries ultimately made for a much more difficult 2014 campaign than anticipated. It would be safe to say that had Caldwell and Defoe played full, 34-game seasons in 2014, Toronto might have been in a much better position at season's end. Already, the club has addressed some of the fitness and training issues using new analytic tools like heart rate monitors and the like, but a bit of luck on the injury front would certainly help, too.

3. Improve the output from the wings: In Dan Lovitz, Jackson and Dominic Oduro, Toronto have three wingers who have shown quality but not enough consistency, especially in front of goal. Oduro and Jackson have always blown hot-and-cold, while Lovitz looked like a useful piece as a rookie. That said, it shouldn't shock anyoen if there are a few new wingers in camp to start 2015.