"One more such victory and we will be utterly undone."

– Pyrrhus of Epirus after the Battle of Asculum

Pyrrhus was fighting the Romans, leading a collection of Greek city-states against the nascent Mediterranean superpower. His point was simple: The losses suffered in victory were so great, so substantial, that there would be no army to field, no more battles to fight – let alone win – after his victory at Asculum.

The US, without Jozy Altidore for what looks like the rest of the tournament and without Matt Besler for hopefully something shorter than that, can't afford many more personnel losses, even if they turn into wins.

But that's a worry for another day. For now, it's three points thanks to a hard-earned, bunker-and-pray 2-1 win over Ghana:

1. Beasley on an island out wide on the left.

There was a lot of shade being thrown at DaMarcus Beasley on Twitter, as if it was his fault that the Ghanaians kept bombing down his flank in 2-v-1s and whipping in crosses.

You see the math, right? When it's 2-v-1 on the flank, the best thing you can do as a fullback is coax the opposition into hopeful benders, which is exactly what Beasley did, save for the one time he literally fell on his rear as Christian Atsu cut inside and tried to create danger that Besler snuffed out.

That moment of play just encouraged people (including some smart folks who should know the game better) to pile on. But considering he was going 1-v-2, he did well because – and I'm going all caps here because I don't trust the weight of mere words – NOBODY GOT BEHIND HIM. The US can deal with crosses all day, but you don't want Geoff Cameron, Besler – most likely John Brooks now – or especially Omar Gonzalez having to come out and meet attackers wide. 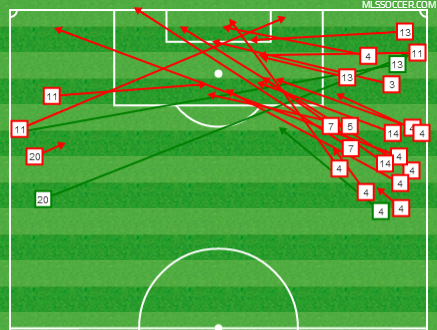 They hit 30 crosses from open play – seven more than anyone else this tournament! That's David Moyes territory.

Is that 15 crosses now for Ghana? 16? It's like they came into the game already out of ideas.

The US invited Ghana forward, and wanted them to play thoughtlessly. Jermaine Jones pushe up the left real high to hunt the ball, and it worked.

2. Pulling the plug out of the central midfield

The US only made danger from the run of play when they were able to pull the plug on Ghana’s central midfield and force the central defense to play 1-v-1. Sulley Muntari was absolutely culpable on the Clint Dempsey goal, the way he edged toward the ball – a hyper-aggressive defensive stance – instead of cutting off the run of Dempsey. This is what I tweeted about pregame:

Quoting myself from 5 tweets ago: "US needs to pull Rabiu out of the hole and go at the Ghanaian central pairing."

And here's the play in question:

Only thing I got wrong was that it was Muntari instead of Mohammed Rabiu (sorry to throw my arm out patting myself on the back).

What was interesting about this play is that this is the exact problem the dual pivot (two deep-lying central midfielders, which is what Muntari and Rabiu are) is supposed to prevent – it’s supposed to clean up in front of the central pairing, giving them extra protection. But because neither player in that spot is a pure d-mid, they have to play a hybrid role, switching hats in mid-flight. So sometimes you attack the ball, and sometimes you go with the player. When you attack the ball, you have to get it or you’re giving your opponent a free run at the backline.

Muntari, as experienced in big games as any player on the field, got his lines crossed for a split second. Dempsey punished him.

3. My worry with Fabian Johnson

Ghana spent way more time attacking up Beasley's side than Fabian Johnson's for some reason – maybe they didn't watch the tape of the Nigeria game or something. Johnson is electric going forward, and a "must-start" for me. When he gets involved in the attack, he can elevate the US to that "another level" Klinsmann has loved to talk about since Day 1.

But he's an inattentive defender off the ball, which is why he's bounced around quite a bit on the field in his club career. On Andre Ayew's goal, he was at fault:

“@MLSAnalyst: Fabian Johnson absolutely skinned. This is known. Shockingly inattentive from him.” Exactly. Not Howard's fault.

This is where Cristiano Ronaldo and Mario Götze live. They will watch tape. Johnson was good all day in the challenge, but he has to be better on tracking and hand-offs.

7. I'm not ready to blame Klinsmann's training routine for the pair of muscle injuries the US suffered. But there certainly seems to a bit of a pattern being built up.

Remember, part of Brian Straus's article in 2013 focused on how Klinsmann overtrains players in camp – and that article included (anonymous) quotes from guys who are in Brazil. Philip Lahm, in his autobiography, said much the same thing, pointing out that Klinsmann prefers to focus on fitness over tactics or ball work:

So many injuries for #USA. Too many. Have to question Klinsmann's preparation. #WorldCup

Just wonder how big a part Klinsmann's intense pre-World Cup training camp has played in these injuries for the USA.

6. Jones was beyond excellent.  I've hated him in the central midfield for the US for a long time, but pushing him out left for the last two games has resulted in two wins largely thanks to his box-to-box play. He was fantastic. I can't say enough good things about his work today.

5. Kyle Beckerman was just as good as Jones. He's so positionally sound and smart at d-mid, he allows everyone else to run around and pressure where they want. And then when the entire team is on the back foot, he sweeps in front of the central defense like the elite reader of the game he is.

And in retrospect, Bob's biggest mistake in 2010 was not bringing Kyle Beckerman. Dude's been a monster today.

He allowed nothing up the middle. Compare that to 2010, when the US were far too soft in Zone 14.

HAHAHAHAHA USA HAHAHAHAHA, I DIDNT EVEN KNOW GHANA SCORED UNTIL MY PHONE NOTIFIED ME #HAHA

3. While Jones and Beckerman were great,  Michael Bradley was plain bad. Amazing for him to take a mulligan but the US gets three points. Never would have predicted that.

2. Now onto the tough part: Klinsmann screwed up his roster selection. He really did.

Neither Aron Johannsson nor Chris Wondolowski can do the target-forward work that the US need to have out there in order to avoid getting pressed to death. It's not that punting up to a No. 9 is a great strategy – it's not. It's that sometimes it's the best strategy left when your midfield is getting overrun.

Ghana welcome to press now without Jozy. Really furious about this.

Jozy, and Eddie Johnson and (in theory) Terrence Boyd can do that kind of work. We saw ArJo provide nothing of the sort today – he had almost no impact on the game – and we all know how Wondo struggles in MLS play without Steven Lenhart or Alan Gordon running interference.

How's he going to do against Portugal and Germany?

Expect the US to get pressed to death for the next 180 minutes. Which means...

1. We're back to Bora Ball. People don't want to admit it, but this team plays more like the 1994 US World Cup team than any of the following ones. We defend in deep blocks, we run our guts out, we kill you on set pieces.

Klinsmann didn't deliver the soccer revolution he promised – not even close. But Bora got us through the group playing the Ugly Game two decades ago, and with three points in our back pockets, there's no reason to aim for anything less this time around.