After the protected lists for Wednesday’s Expansion Draft proliferated across the Internet Monday afternoon, both Orlando City and New York City FC began a deep dive into the available players.

They’ll undoubtedly be comparing and contrasting available players (and contracts) across every position to players they have already signed for their inaugural campaign next season.

While coaches are mostly estimating how potential players would "fit" into the playing systems they intend to build, they should also be considering how the players would fit at their respective stadiums. And that is strikingly similar to what we have learned in Major League Baseball analytics, namely that certain players may have increased values at certain venues in soccer.

So off we go on this journey of the imagination to the South Bronx, where the field at Yankee Stadium is expected to be 64 meters wide. That's tied with Houston’s BBVA Compass Stadium for the narrowest in Major League Soccer, and that means the long throw – clumsy and random – just might be a bit more valuable to NYCFC than some more elegant weapon for a more civilized age.

Thus it would make sense that NYCFC might look at a player proficient in the long throw in. There is, indeed, no match for a good blaster at your side.

After stripping away shorter, possession-oriented throws and only considering throws longer than 15 meters, these are the 10 players with the longest average throw in 2014 that attempted at least 20 throw-ins: 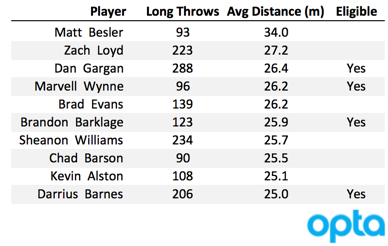 The irony here is that NYCFC boss Jason Kreis has what we'll term "mixed emotions" about the long throw. Read THIS story from early in 2013, and pay particular attention to this quote:

"Love it. Great soccer isn't it? Beautiful," snarked Kreis when asked about long throw-ins in general during a post-game press conference. "I have a lot of thoughts. I'm trying not to get myself in too much trouble or put myself up for too much chastisement, but hell with it, I will. For me, that's a foul throw. I've been saying that for the last two years — that a lot of these long throw-ins that we're seeing now, are frankly just foul in my eyes.

"I've asked referees about it, don’t get too much response to it. [When] I grew up you had, you had to throw the ball in with two hands, not one," Kreis continued. "We're seeing a lot players use almost completely one hand. I'm tempted maybe the next game I'll send out my players and maybe we will just throw it in with one hand and see if that gets called against us.”

While looking at a player's average throw-in distance may not be the perfect way to evaluate which players have the longest throw in the league, it's a starting point. For example, some players who have long throws may have been instructed not to use them during the season. In that example, a player's throw-in prowess would not have been captured by our process.

Imperfections in the process aside, let's not be surprised if we see MLS Cup-winning right back Dan Gargan selected by NYCFC. While his other attributes probably merit his selection anyway, his long throws might just provide NYCFC a boost they didn't initially consider – and help the head coach turn, just a little bit, to his own, personal dark side.