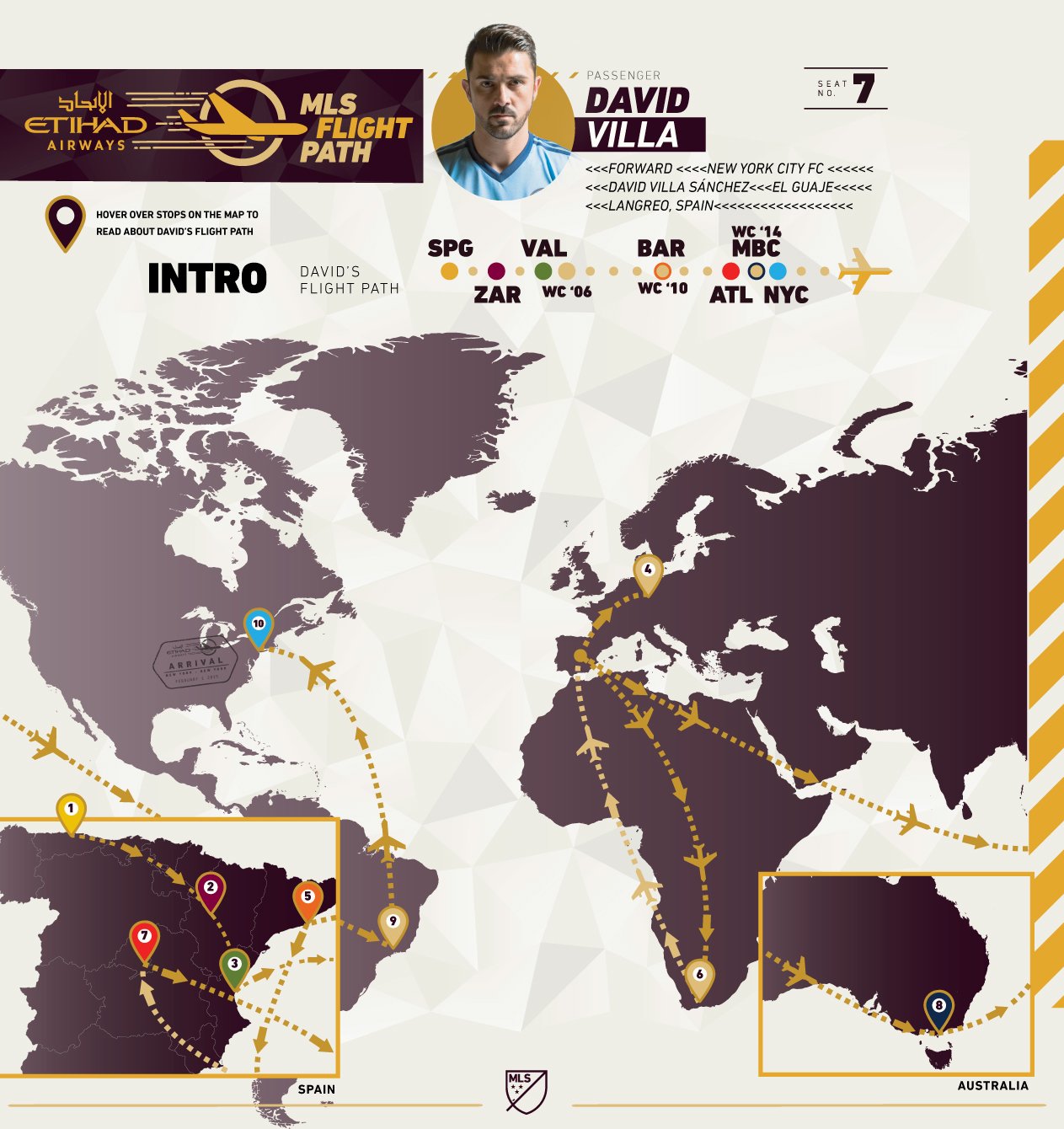 New York City FC star David Villa is currently enjoying yet another call-up for the Spanish national team, based on his stellar club performance in MLS. The international nod is well-deserved, but unsurprising.

Before coming to MLS, David Villa had already experienced a soccer career of dreams. Villa’s won the World Cup with Spain team in 2010, won both La Liga and UEFA Champions League with Barcelona, among many other major accomplishments.

But with NYCFC, Villa has written a new, amazing chapter in his soccer narrative. He became the team’s first designated player in July 2014, captaining its first-ever match when the team launched in 2015. Last year, his performance with the team earned him the Landon Donovan MLS MVP award.

With 60 goals and counting in his first two-and-a-half seasons in the league, he is making a case for himself as one of the best MLS players of this era.

Villa began his career with his hometown team of Sporting Gijon, located just 20 miles from his birthplace in the Asturias region of Northern Spain. After starting with Gijon’s youth squads, he first broke into the senior team in 2001.

“It was nice to start there. I was in the academy as a kid, and when I was growing up, I had a dream to play for the first team, like all the guys in their academy. It’s a team that likes to bring players up from the academy to the first team, from the start, when you’re young. And I was one of them!”

In 2003, Villa made the leap from his boyhood team to Real Zaragoza, which had then been newly promoted to La Liga. At just 21, he was playing in La Liga for the first time, and by 2004, was helping Zaragoza stock its trophy cabinet with new winnings.

In addition, he got his first taste of first-team European competition when his new team qualified to play in the UEFA Cup, the predecessor to the current, equivalent Europa League competition.

“I was happiest there winning two titles. We won a Copa del Rey over Real Madrid and a Supercopa de España against Valencia. It was nice, because it was always difficult for Zaragoza to beat Real Madrid and Valencia, teams of that caliber, and we did it.“

Villa with the 2010 FIFA World Cup trophy. Photo via Reuters

It was during Villa’s time at Zaragoza that he was first called up to the Spanish national team’s senior squad. That started an incredible international career in which he’s earned nearly 100 caps, scored nearly 60 goals, and played alongside a golden generation of Spanish players.

Villa’s time with the team has included a turn at the 2006 World Cup, victory at the Euros in 2008, a World Cup win in 2010, another World Cup appearance in 2014, and, most recently, a call-up for World Cup Qualifying this year.

It was fitting for a champion in the making like Villa to play in the Champions League, and finally got his chance with Valencia. He moved to the club in 2005 and debuted in Champions League the following year. In five seasons with the club, he was incredibly productive, with 107 goals in 166 appearances.

“Coming to Valencia gave me the chance to play in the Champions League, which to me is the world’s best tournament for club. To be able to be part of that with Valencia was really amazing.”

In May 2010, Villa kicked off a momentous summer by signing a four-year contract with Barcelona. In his first season, his new team reached the UEFA Champions League finals against Manchester United, and his second-half insurance goal sealed the 3-1 victory.

Though his playing time at Barcelona was interrupted by the injury that would also force him to sit out Spain’s 2012 Euros victory, he returned in August 2012, largely in a supersub role, for one final season in red and blue.

“It was an easy adjustment for me because so many of the Spanish national players played with Barcelona. They helped me a lot when I arrived in Barcelona. I was used to playing more as a striker, as a  No. 9, and with my new team, I’d be more in the No. 11 role, on the left side, but the players and the coaches helped me a lot.

It was amazing to be there and to win the titles we did: Champions League, La Liga. There are always good memories with winning trophies. And I was very happy for the chance to play with Messi — he’s the best!

In 2013, he moved to one of Barcelona’s prime La Liga rivals in Atletico Madrid. Atleti hadn’t won La Liga since 1996, in large part due to Barcelona and Real Madrid’s prolonged dominance.

But in Villa’s one year there, he was able to help guide Los Colchoneros to a title over those giants. Atletico also got to the Champions League finals against their crosstown rivals that year, losing in heartbreaking fashion by giving up an equalizer in the dying moments of regulation, and then giving up three goals in extra time.

“I was only there a year, but it was an intense year, a great year. We played at a really high level, winning the league, and coming so close to winning the Champions League. It was a really amazing experience.”

In 2014, Villa embarked on an entirely different challenge, becoming part of a brand-new MLS team as its first Designated Player. As he waited for NYCFC to start play in 2015, he spent a short loan stint at sister club Melbourne City in 2014.

Fellow European legends Andrea Pirlo and Frank Lampard would later join him in helping NYCFC makes its debut the following year. In the process, he got to know and love his current home city.

“It was great to be part of the team from the start, building a club. It was a great opportunity for me to be there from the first. I’ve been trying every day here to do my best. Soccer is soccer. You always need to adjust to a new league, but I’m the same player.

I enjoy the city. I enjoy Central Park. There’s always plenty to do and plenty to choose from in my off days.”