At season’s end in 2013, you’d have been hard pressed to find a single person who would’ve picked D.C. United to finish in first place just a year later.

“When guys don’t win in practice, guys are upset and guys are arguing – it’s not necessarily a bad argument, it’s not like fists are flying – but guys want to win in practice and it translates over into the game. A lot of us came in here with a chip on our shoulder, maybe felt let go of by other teams."

"I’ve been asked to play a different style of soccer than I’ve been playing the least two years in Seattle. Obviously, I feel like here we’re more of a pressing, hardworking team and we can press the ball high up the field and win balls, be good in that area and break in our attacking half, whereas in Seattle - and no disrespect to the guys that are here - I felt like I didn’t have to run as much because we had better guys that had more quality on the ball.”

Yet that’s exactly what United did, defying the odds and storming to the top of the Eastern Conference in 2014.

It wasn’t all smooth sailing for United. After a top-to-bottom roster overhaul that saw only a handful of starters retain their spots heading into this season, United went winless through their first three games. The skid prompted fears that D.C.’s fortunes would change little from 2013’s historically bad campaign – when they set multiple MLS records for futility – but D.C.’s collection of seasoned MLS veterans and young talent eventually righted the ship.

And they did so in historic fashion: United’s 43-point swing was the largest in MLS history. What’s more, they emerged from CONCACAF Champions League group-stage play undefeated, booking a spot in 2015’s knockout round, and they sewed up a spot in the 2015-16 edition of the tournament via their regular-season point total, as well.

All of that success made it all the more disappointing, though, when United were eliminated in the conference semifinals, downed by an in-form New York Red Bulls side that caught D.C. asleep at the wheel in the opening leg. It left many United fans – and players – wondering just what could’ve been.

D.C.’s 3-0 victory over Sporting KC on Aug. 23 was a statement game in every sense of the phrase. United put three on the board in an eight-minute span in the first half against the defending MLS Cup champions, nabbing their first win in franchise history at Sporting Park and leapfrogging SKC in the conference standings. From that point on, they’d never look back, taking the Eastern Conference crown at a trot and continuing to carve out their identity as a team that scraps in defense and hits hard on the counter.

Unquestionably, it’s United’s 2-0 loss at Red Bull Arena in the first leg of the conference semifinals.

D.C. entered the match having played a string of late-season games against lesser opponents, while New York entered it having just knocked off SKC in a Knockout Round match. Predictably, the Red Bulls looked like the better team from the get-go. After the match, there was a sense of anger and frustration in D.C.’s locker room – understandable from a group that had been one of MLS’ most consistent sides in 2014 yet put their worst foot forward at the worst possible time. The hole proved too deep to crawl out of in the second leg a week later. United played much better, besting the Red Bulls 2-1, yet lost the series on aggregate.

Goal of the Year

Intentional or not, Fabian Espindola’s magnificent chip against Sporting KC on May 31 takes the cake. In the 28th minute, Espindola collected a loose ball, took a touch toward the corner of the box and floated in a chip that eluded goalkeeper Eric Kronberg and found the upper corner at the far post. When asked after the match whether the strike was intentional or a mishit cross, Espindola gave a wry smile before saying, “Look at the tape. If I looked up before I hit it, we’ll say it was intentional.”

It’s an honor that must go to Bill Hamid. Though Espindola drew the lion’s share of praise while putting together an MVP-caliber season of his own, and Perry Kitchen developed into a rock in his fourth season as the starting d-mid, the D.C. ‘keeper was voted the league's best and kept his team in several games that they easily could’ve lost. Nobody in MLS is better at staying big in 1-v-1 situations, and the Homegrown’s progress wasn’t just limited to MLS: Hamid seems to have clawed a little closer toward being a regular contributor at the international level as well.

After a 2013 season that saw United give up a staggering amount of goals, Olsen and general manager Dave Kasper set out to reshape D.C.’s backline, bringing in the likes of Sean Franklin, Jeff Parke and first-round draft pick Steve Birnbaum to shore things up. But it was the addition of Bobby Boswell – who spent five productive seasons with the Houston Dynamo before making his homecoming to D.C. – that brought it all together. Boswell had a career year at age 31, keeping pace with players a decade younger than him and anchoring a United backline that would eventually tie with LA as the league’s stingiest. 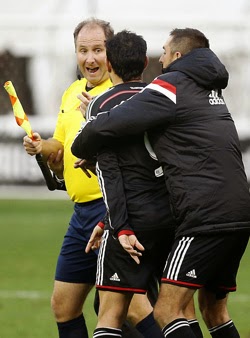 1. Defensive Depth: After declining their options on Parke, Nana Attakora and Conor Shanosky, United are left with just three natural center backs: Boswell, Birnbaum and Kofi Opare. Ghanian fullback Samuel Inkoom also departs after spending just half a year with the Black-and-Red. If D.C. are to match their stellar 2014 defensive performance, they’ll need to find depth – Birnbaum and Boswell seem a lock to start centrally, while Franklin and Taylor Kemp look likely to be United’s top-choice outside backs, with Chris Korb in reserve. United would do well to reinforce those picks with a couple of quality defenders.

2. Firepower: While United had little trouble finding the back of the net in 2014 – in the East, only New York put more goals on the board than D.C. – they’ll need a touch of help up top in 2015. United brought in Eddie Johnson after 2013’s lackluster campaign to help solve their offensive woes. While the former Seattle Sounder managed to find ways to contribute, he wasn’t quite the goal-scoring powerhouse they’d hoped for and at times proved to be a distraction off the pitch.

United instead found success with the pairing of Espindola and Luis Silva. Problem is, they’ll be without Espindola for nearly 20% of their 2015 regular season after the Argentine was handed a six-game suspension for making contact with an official at year’s end. Move beyond Espindola, Johnson and Silva and United’s choices at forward become a smudge murkier: playing Chris Rolfe or Chris Pontius out of position, hoping Conor Doyle comes back from injury, or that one of the Homegrown kids on the roster makes a move.

3. Men in the Middle: D.C. were strong centrally in 2014. MLS stalwart Davy Arnaud looked like a midfielder half his age and managed to forge an efficient partnership with Kitchen. Though Arnaud looks no worse for wear at 34, his age remains a concern, and the loss of Lewis Neal – United’s primary backup in midfield who was selected by Orlando City in the expansion draft – only makes United’s need to find central depth more pressing.