It didn’t take long after the dawn of 2014 to figure out that big changes were on the horizon in the new year for the Colorado Rapids.

After reaching the postseason the year before under head coach Oscar Pareja, the Rapids found themselves acclimating to a new boss in club icon Pablo Mastroeni and trying to find the same balance of youth and experience that made them a surprisingly tough out in 2013.

“We are certainly going to bring in another Designated Player, without question. I'm not going to attempt to quantify that kind of spending. I don't envision that kind of [Toronto FC] spending, but are we going to spend real money? Absolutely.”

“The future for this team is bright. It’s hard to see that, but being with these guys for the last 10 months, I’ve seen some great strides and creating a name for themselves and more importantly, getting better with each passing day.”

“I've been brought to tears at times, trying to get this thing right physically, but mentally - certainly watching teams at the weekend, especially when the Rapids are playing - it's difficult, because you want to contribute as much as you can. You never know how much longer you have left as a player.”

It never worked out the way they hoped. Despite a strong start to the season that had them very much in the mix in the Western Conference during the summer, injuries and sour form doomed them for the final three months of the season. Done in by a 14-game winless streak that lasted from July 30 until well after the leaves started falling on the Front Range at the end of October, the Rapids eventually finished second-to-last in the Western Conference and with just eight wins, their fewest since 2001.

Some could call the season an anomaly, chalked up to injuries that felled the team’s two best defenders and a first-year head coach still learning the ropes. But it’s clear what went down in Denver this year won’t be forgotten. The Rapids have already had a busy offseason – goodbye Jose Mari and Marvell Wynne, hello Michael Harrington – and club president Tim Hinchey has already said the Rapids will try to bring in a second Designated Player for 2015.

After this season, they’ll need all the help they can get.

The season was humming along quite nicely for the Rapids when the Vancouver Whitecaps pulled into town on June 28, riding a franchise-record eight-game unbeaten streak. In one of their final truly comprehensive performances before the season went off the rails, the Rapids pounced on the ‘Caps early behind a wonderful goal from second-year midfielder Dillon Powers and looked every bit a playoff contender in the West. But the Rapids won just one more game after this night and the lineup was decimated by injury roughly six weeks later. If there was a high water mark for the club in 2014, this was it.

Of course there are plenty of losses to choose from – a devastating 4-3 loss to the Galaxy at home Aug. 20 and then a 6-0 pasting to the eventual MLS champs in LA on Sept. 5 were both particularly humbling – but the season was lost when center back Drew Moor went down. A Rapids iron man since 2009 and one of the few players left from the 2010 MLS Cup squad, Moor suffered a torn ACL in a match against D.C. United on Aug. 17. Starlet center back Shane O’Neill was also limited this season by a pesky groin injury, but when the Rapids lost Moor, they lost the season for good.

So much debate on this one. Midfielder Jose Mari’s swerving half-volley off the BC Place turf in Vancouver on April 5 was Goal of the Year type stuff, and rightfully so. But our vote goes to Kamani Hill, whose Zlatan-esque backheel flick off a corner kick vs. the Houston Dynamo on June 1 was as ruthless as it was inventive, capping a 3-0 win.

How impressive has Deshorn Brown been over his first two seasons in MLS? After scoring 10 goals in 30 games in 2014, he became the first player since Damani Ralph in 2003-04 to score double-digit goals in each of his first two seasons out of college. No other player on the Rapids scored more than six goals this season.

The Rapids didn’t make a ton of successful personnel moves in 2014, but it’s tough to deny their day at the SuperDraft wasn’t something to remember for the future. The club selected Louisville midfielder Marlon Hairston with the 12th overall pick and Wake Forest midfielder Jared Watts 33rd, and both made promising contributions in their first year in the league. The verdict is still out on some of the Rapids’ other 2014 acquisitions – Zat Knight, for example – but Hairston and Watts add to a young base of talent for Mastroeni’s club in 2015.

“There’s enough blame to go around and it starts right here. I don’t blame anyone. I just look at it as how can I do better as a coach. What can my staff do better? And then we figure out how that can all trickle on down. It’s about honest assessment, and what we think is best for the group moving forward.” – Pablo Mastroeni, following the team’s 4-1 loss to Seattle Sounders on Oct. 5. 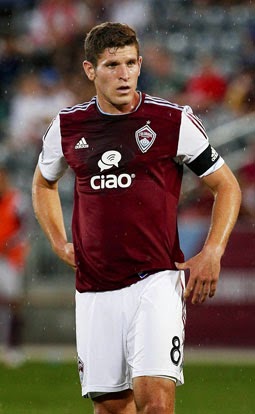 1. A Tactical Identity: There's a learning curve for players, and there's surely a learning curve for coaches as well. Mastroeni struggled in his first season, chopping and changing the lineup even when he had a full roster. 2015 needs to see Powers back in central midfield on a full-time basis, hitting those field-spreading diagonals that served the team so well in 2013.

2. Depth in the Middle: The middle of midfield, the middle of defense... it's all looking pretty thin at this point in the offseason, especially with Moor's status early next year uncertain and O'Neill getting sniffs overseas. They've already been active at the waiver wire by picking up a proven MLS guy (Welcome back, Bobby Burling), and there will be many, many more moves to come.

3. Goals on Goals: Brown has proved to be a consistent MLS goalscorer... and he's just about the only one on the roster who can claim that. Part of this goes back to the lack of tactical identity, as guys can't get comfortable if they're playing a new spot every week. But part of it is just raw talent, which is why Hinchey says DP No. 2 is on the way. Rapids fans will be hoping whoever that happens to be is more productive than DP No. 1, Gabriel Torres.