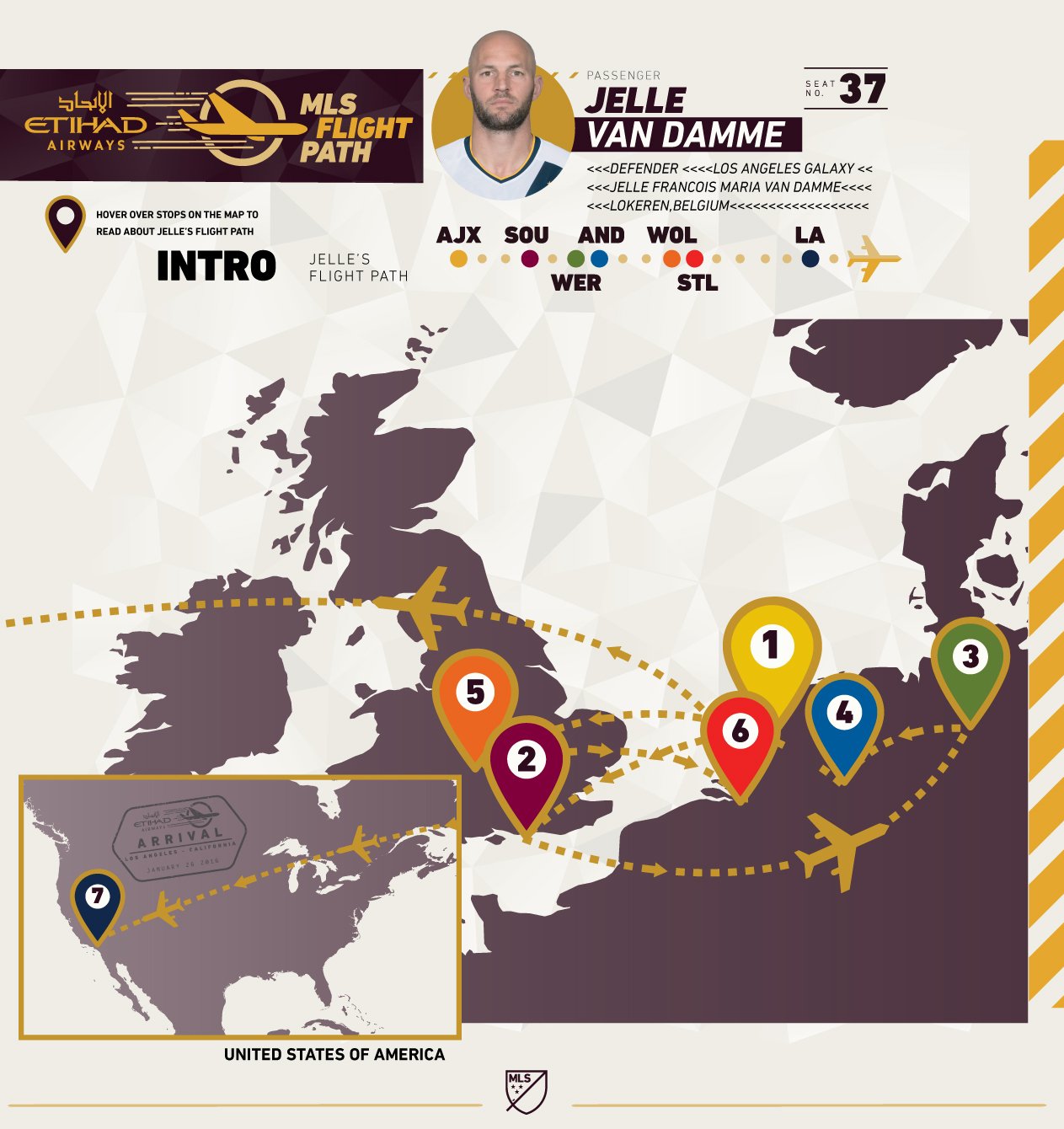 Jelle Van Damme is in his second season as the anchor of the LA Galaxy’s defense, serving as the team’s captain as well as providing its defensive muscle. But Van Damme's tenure in the City of Angels marks the latest stop in a professional career that's spanned more than 15 years.

In addition to representing Belgium in international competition, he’s played all over Europe. That's included stops in the Premier League and the Bundesliga, along with time with an Eredivisie giant, and on both sides of a fierce Belgian rivalry. Criss-crossing the continent, Van Damme says, opened his eyes to different cultures and styles of soccer as he followed his career's flight path.

After coming up through Belgium’s youth ranks and making his first Jupiler League roster (with Germinal Beerschot in 2001), Van Damme got the opportunity to play with a perennial European powerhouse, Amsterdam’s Ajax, in 2002. It's there, he says, that he first started to embrace new playing styles and points of view beyond that of his home country.

"It’s a great team. It’s a team with a big history, and I was just a kid, but I was glad to be a part of a really bad-ass team. I think I learned a lot.

People in Amsterdam are really straight to the point. That’s what I like. As a professional soccer player, you have to be strong mentally, and that’s the biggest thing I learned over there. If they like you, if they don’t like you, they’ll tell you straight to your face. They won’t go gentle. They’re very direct people, and I like it. I prefer that.

I remember when I left, the coach told me, 'You’re not a shy Belgian kid anymore. You’re a guy from Amsterdam.' I think I learned a lot in that period."

Van Damme with Southampton in 2005; photo via Reuters

In 2004, Van Damme got the opportunity to move to a Premier League team, Southampton, and during his stay there, also got an opportunity (via a loan) to play in the Bundesliga's Werder Bremen. By traveling between the two, he learned about the standards and tactics of two of the world's top leagues.

"The Premier League is probably the best league in the world, along with the Bundesliga. I think for me, personally, those are the two best in the world. Even though I was young, in the games I played in, I played well. The only problem was I was on my own, and I had a few injuries there as well. I think I could have done better if I’d taken more chances than I was used to. But it was a great experience. I really enjoyed the level of soccer I experienced playing over there.

You have to realize it’s a big opportunity, and you have to take care of your body every single day that you’re there. It’s important as well to have good people around you to help you with this, and make sure you don’t do stupid stuff, to make sure you’re focused all the time. You have to work your butt off!"

In 2006, Van Damme returned to his home country to play for one of its three biggest clubs, Anderlecht. There, he found himself in the middle of one of Belgiums' biggest sporting and cultural rivalries.

"It’s probably the biggest club in Belgium, with the biggest history for sure. They won the most titles. For me, at that point, going back to Belgium was like a reinvestment into myself. At that point, I’d played enough games for my evolution as a soccer player. The issue was, I was playing in the national team as well. I needed to play more often than I did in Germany or in England.

Honestly, I had four amazing seasons over there [at Anderlecht]. We won two cups; we won the league twice. I still talk to those people. I only have good memories of that team. I was more a Brugge fan growing up, though.

My last season there was an amazing season. I played in the midfield, at a high level. I was scoring goals, I was important for the team."

In 2010, Van Damme wasn’t able to come to an agreement to renew his ties with Anderlecht, and sought another Premier League opportunity, this time with Midlands team Wolverhampton Wanderers.

"My first idea was to sign a new deal with Anderlecht, but we couldn’t work it out the way I wanted it and the way they wanted it. I knew I had a few opportunities in Germany and in England. I picked the team I was thinking wanted me the most.

I went over there; I had a great pre-season, in the midfield again. Then I got an injury, I was out for a few weeks. My situation in my private life was difficult. My son was 10 months old, and my wife – my ex-wife now – was pregnant. She was going up and down a lot. I was alone a lot, and you miss your family. You miss your wife, your kids.

And the team was battling for relegation, and back in Belgium, the press was talking about how Anderlecht was missing me. We talked about coming back to Belgium, solving my situation with my family life, being back home again, spending more time together. I thought about going back, but I didn’t work out the way it was planned."

His desire to return home came in an unexpected form. Rather than return to Anderlecht, Van Damme would answer Standard Liège's call in 2011 and represent the red side of that keen rivalry, even becoming the captain of his new team.

"While I was waiting to hear from Anderlecht, Standard came over to England, and they were very direct. There always comes a point where you have to choose, and I chose Standard. I went there.

It was a little bit awkward in the beginning because I had four amazing years at Anderlecht. I loved being there and playing there, and of course, I went to their big rivals.

I understand how it goes. One day, you’re one of their heroes, and the next, you’re an enemy. It’s life. That’s just the way it goes. But I spent five years there at Liège, and I love that club. The fans are amazing. Probably the best fans in Belgium. And it clicked right away. It felt like home.

I signed with Liège in December, and the first game after the winter break was against Anderlecht, in Anderlecht. That was pretty big and pretty intense. But I like those kind of games. I like rivalry games. They booed me and said stuff about my family. But for me, it goes in one ear and out the other. It’s the number one sport in Europe, and it’s just that intense."

After five successful seasons in Liège, Van Damme wanted a new challenge, and moved beyond Europe to become the latest in a string of legendary Designated Players at the LA Galaxy. The US, and MLS, presented a new frontier in lifestyle and travel, as well as new athletic challenges.

"Coming to MLS was a big step. It was a big change for me. I decided to come here because I was 32, it was now or never. I felt ready for it.

I must say, I don’t regret it, not at all. I’d only been to the States once before coming to Los Angeles. I love it. I love being here. The only thing I miss is my kids.

The game is more physical here. There’s less tempo during the game, because of the heat. I think that’s the biggest issue, playing games that sometimes start at 1 or 2 pm that are 85 to 90 degrees. It slows down the game. Sometimes, you see the tempo is slow because of the heat and that’s normal.

In Europe, it’s a little more tactical, but there, when a smaller team plays a bigger team, they’re not coming to play soccer. They’re just coming to defend. And that’s hard. I think the games in the US are more open.

The Galaxy is one of the biggest clubs in the league, and they have the most titles. I have a winner’s mentality, where I want to win all the time, I want to win a Cup every year.

Our fan base is good. I’ve noticed with other teams, they have good fan bases, too. Seattle, Portland, Orlando … I love playing in Orlando. I feel that it’s getting bigger and bigger in the US.

There are other great players I admire too – Sebastian Giovinco is a great player. He could play with a top team in Europe. There’s nothing much more to say about that. I also like playing against Cyle Larin from Orlando; he could have a great career in Europe as well. Also, Fanendo Adi from Portland, I love playing against him. He’s a really good striker. And I can’t forget David Villa, from New York City!

I’m 32, I’ve pretty much seen it all. But there are a lot of good players here. It has been a great experience."